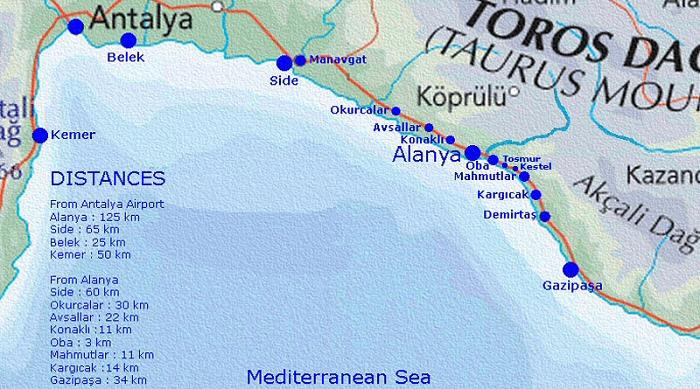 Known as the “Turkish Riviera”, Alanya is a popular summer resort as well as a modern Turkish town where over 80 000 locals live all year round. Alanya has a splendid setting, two long beaches split by a beautiful headland, on which the castle and old town was set. The modern city streches along the plain between the Mediterranean Sea and the Taurus Mountains. Although the coastal strip is dominated by a subtropical climate and the number of sunny days reach up to 300 a year, the surrounding mountains, rivers and high rainfall make the region green and fertile.The end of the tourist season is not the end of life in Alanya as there is a large population living here, getting more and more cosmopolitan with over 10,000 European residents.

History: Altough the early history of Alanya,whose ancient name was Coracesium, is not known,according to first reference,it was ruled by Persians like rest of the Cilicia region in 4 BC.About 197 BC Coracesium was besieged by Antiochus III of Syria.Later the city became a pirate stronghold.One of the pirates,Diodotus Tryphon made the city his headquarter for his riot against Antiochus VII.Eventually the activities of the pirates,such as the seizure of grain ships which threatened even Rome with widespread hunger,kidnapping Roman citizens for ransom made Romans attempt to solve the problem.
So did The Great Pompey who defeated the pirates in a sea-battle off Coracesium in 67 BC.

Later Coracesium and the surrounding area were given to Cleopatra by Anthony.This was a generous gift,because Egypt had lack of timber,in contrary forest in the hinterlands here was abundant,especially precious cedar trees,plenty of which was transferred to Egypt in order to build warships for Cleopatra’s fleet. Coracesium seems to have had a uneventful life under the Romans.During the imperial era,it must have become a large city,as it minted coinage in its own name. During the Byzantine period the city became an episcopal see under Side,the nearby ancient city and changed its name to Kalonoros,which means ‘beatiful mountain’. As soon as the Seljuk sultan Alaeddin Keykubad(reigned 1220-1237)ascended the throne,his first strategic ploy was to move against this castle.

On securing its surrender from its ruler Armenian Kyr Vard,he called the city Alaiye,which means ‘city of Ala’,a name derived from Alaeddin.Because this was a very strategic point and the sultan wintered here,he constructed the citadel and its protective walls which is 6.5 km long,and number of other buildings which still survive.
Under Keykubad,Alaiye became an important cultural and commercial centre and this continued untill the 13 C,when Seljuks were outset by the Karamanids.Finally,in 1471 the city was captured by an Ottoman army led by the Grand Vizier of Mehmed the Concueror.

GEOGRAPHY OF ALANYA
On the road of the Meditarian sea coast Alanya is one of the most important settled eitles with it’s economic cultivation, fishing, cattle-breeding, hand skills and other functional specialities. The extension of the plateau and mountainous parts of the north side of the Taurus mountain looking from the high plateu zone the highness counted from the sea is abouta 1000 meters. The peninsula of Alanya covers a surrounding of 6500 meters long at the south. The land of the peninsula is apart from the Taurus mountains. Because the Taurus mountains do not give a pass into the north direction by sea it’s possible to get inside the Anatolian through the Kocdovat pass, Yel bridge, Bird’s nest and the Dim and Alara creeks make it possible to get into the Dim and Alara valley.

The harbour had to be build in the east of course because of the strong connection of central Anatolian and the uprignt profile of the raising Alanya peninsula along the coast. Because Alanya is entitled to the typical Meditarian climate the summers are warm and dry and the winters luke-warm and rainy. In our region the winters pass most of the time like summer; the influence of the summer warmth gives the reaction that the summer offshore “breeze from the sea to the land at afternoon is being Iowered. The high temperature of the sea warmth and the fact that you can keep on sun bading for a long time makes the attractiqn of Alanya higher. Because of our position in the Meditarian sea area we have the most fertile ground in Alanya witch gives us the existence of black kite and cedar forests in the area of high parts pf the northern mountains and calabrian pine in the area of the coast. With a sea like in incekum you have to get in the inner forest fields. In this forrest where there are Calabrian pines, Black Kites, Cedars, Firtress, Oaktrees, Junipers, Plane trees and Common Alders you will find forrest products Nike Poplars, lime, Chest-nuts and Hazelnuts.

The carpets, saddle bags, silken woven tissues, braces of dry flowers, mascots and dolls out of pumpkins, Laces, pinked writings, blouses and dresses made out of a kind of cheese cloth are made as gifts and memories objects in the waving frames owned to the people that live in the castle. Of course the beautiful caves that take place in the north and west side of the peninsula of Alanya, with different kind of rumours, take shape in the beauty of geologic as the pirates, love and phosphore caves. If you go to the north direction of the peninsula from the harbour the first cave you will cross is the pifrates cave. With a sea motor you can get into the 10m. Wide and 6 m. high entrance of the cave that widens up to the north.

This cave from what they say that there used to be a secret road to the castle has an interesting view over the colourfull stones inside of the rocks in the sea. About the 75 m. long and with two entrances Love cave they say that they used to hide captured girls and their plundered tools. At the west side of the peninsula in witch you can get bin with a small fishers boat there is the interesting and beautiful phosphore cave witch is very worthly to the geology, At nights the inside shines very bright and also at daytime the phosphore glowing will dazzle your eyes. The Damlatas cave who got it’s name from the dropping drops of the stalactite long passage from the entrance is 14 diameters and 15 m. high. It’s a cave that ownes stalagmites and stalactites who have been formed for 15.000. Years. When they first took over. The permit of the crystalline chalk cave it had a 95% dampness, 22 degrees warmth witch doesn’t change, 760 mm. constant pressure, 20,5% oxygen. It is very useful for asthmatic pations so this established cave gives especial profit to curing and tourism. Even bigger than the Darnlatas cave and the guesses are that it’s 1 million years old we have the Dim cave placed in the town Kestel of Alanya. It lies at the south side of the Dim valley. The highness counted from the sea is 232 meters. There are two parts of this cave. The left part is 360 m. and the right part is 50 meters. It’s the second big cave in Turkey to be opened for visitors. At a distance of 4 km. from Alanya in the place garden district there’s the Hasbahge cave, about 4 or 5 times as big as the Darnlatas cave. 15 km. from the provincianol council in the north direction there’s the Catak ot Kadiini cave in the Catak district, also a beautiful stalagmite and stalactite cave. A road of 60 meters coasts with indigo sea-colours, clean sand covered with small bays and beach/=is. While you’re deep in thoughts looking at the sun going down from the Alanya castle the evening brings the night sounds and lights. The relax movement of the moonlight in the harmonious water. Who knows, may be you’ll swim at the same beach as Cleopatra and Antonius did ones.

Placed 30 km. from the city as the beach of Incekum the forrest and sea come together and the plane trees decorate the slope of hills of the high Taurus. With strong running water and clean mountain air there’s a nice place to picnic called Dimgay.

Climate: On the coastal stripe of Alanya,summers are long and warm.Even the winters are quite tepid. Except some short-lasting summer showers which occur very rarely,the summers are dry.It rains particularly in December,January and rarely in the autumn as shower.In avarage,only 40-50 days are cloudy and rainy in a year.At least 9 months a year you can comfortably swim.
In spite of hot and dry summer,the soil in Alanya is very fertile.This is mainly because of the combination of the climate and plenty of water in the region.The streams born originate from the peaks are fed by rain and snow,they run down to the sea all year around are sources of water supply for the town and used for irrigation. In the region Dim,Oba,Kargi,Serapsu and Alara are the main streams and all are used for irrigation. Detailed climate information is stated below: